A to Z Challenge: I is for Ixion

Ixion is a Greek character I’ve gotten to know over the years. He plays a major part in my third book, DemonSpark. First I’ll give you the synopsis of my book, and then I’ll tell you how Ixion plays into the story:

Lily White has two challenges. First, she struggles to keep her ancestry a secret. Her grandfather is Cain immortal, transformed by God into a feiry—a demon incubus. Her second challenge is more complicated. She can’t find a prom date. At Jefferson High School, going solo to the prom would be reputational suicide. However, she’ll do anything to hide her origins, even reject the new hot guy, Ian Kanellis, who’s into her, but knows way too much about her past.
She learns that Ian serves her aunt, the White Feiry. He captures her father, whose blood will be used to destroy all mortals inhabiting the planet. To save her dad, Lily leaves her hometown in Texas to descend into the Everlands—a melting pot of mythological beings. Tiresias’s reanimated corpse, ape-like wraiths called Vraithi, Ammit-the Egyptian, heart-eating goddess—bring it.
She’s got one problem—Ian. As the grandson of Zeus, and the sole remaining Vraithi in human form, only he has the power to kill the White Feiry. He swears he’s sorry for capturing Lily’s dad, but she can’t trust him. Unless she does, she’ll never save the world from destruction, she’ll never see her father alive again, and prom just became more of a myth than her ancestors.

Okay, so you’re probably wondering how Ixion fits into the story. Ian’s father is Ixion. We learn early on that Ian hates his dad. To get you up to speed, Lily learns that Ian is the only person who knows where Zeus is, and Zeus can help her save her father. She has to get Ian’s help, but he’s having daddy issues. At this point in the story, Lily finds out who Ian’s father is, and learns about his past. Of course, I couldn’t tell the myth without giving it a twist. But I won’t reveal the twist here in my blog. You’ll have to read my book if you want to find out what really happened to Ixion. (And that means I’ll have to get it published first!)

To show who Ixion is, I’ve decided to use a snippet from my book. Lily and Ian are staying in an old fort in the Peruvian rainforest to hide from Lily’s aunt, the White Feiry. She finds Ian hiding out in the bell tower, where she coerces him to tell her about his dad…

Lily had to make Ian cooperate. But how? She knew Ian didn’t like his dad. Now seemed like a good time to find out why. If they were going to find the Ever King and free her father, she’d have to.
She climbed the staircase, then entered the bell tower. The scent of rain filled the open space. Through the tall windows, a flash of lightning cut through the midnight sky, followed by a low rumble of thunder.
Ian sat on the windowsill.
A hard knot formed in her stomach.
The lightning illuminated his silhouette. As she approached him, she noticed he’d taken off his gloves. They sat on the windowsill with holes singed through them. She smelled burned leather.
Electricity glowed around his fingertips. She made sure not to touch him as she sat on the ledge.
“You burned your gloves.”
“It happens.”
Another bolt of lightning shot through the sky, lighting the jungle for a brief moment. Sounds of crickets and frogs filled the damp air, reminding her of the thunderstorms back home.
How should she approach the subject of his father? Would he be angry with her for bringing it up? She decided it didn’t matter. He would have to talk about it someday, even if it made him uncomfortable. “Will you tell me about your dad?” she asked in a gentle voice.
He didn’t answer.
“I know it’s hard, but you need to talk to someone.”
“Do I?” he asked with a defiant tone, as if he meant to challenge her. He knew better. Challenges were her weakness, and he seemed to have an uncanny ability at coercing her. This wasn’t going as well as she’d planned. “Tell me about your father,” she insisted.
He leaned closer. “Are you sure you want to know?”
“Yes.”
He paused before speaking. “His name was Ixion. He didn’t come to the Everlands like everyone else. Zeus cast him into Hades long before then—for kin-slaying—the first recorded in Greek history.”
Already she regretted asking. But she had to know more. “Who did he kill?”
“His father-in-law. Pushed him into a bed of coals. But that isn’t the only reason Zeus punished him. My father became an outcast after he killed his father-in-law. Zeus felt sorry for him and brought him to Olympus. And then my dad raped Hera.”
She stared at him, jaw slightly agape.
He shrugged. “I know. He was a real saint, wasn’t he? And thousands of years later, after he’d spent forever in Hades, the White Feiry finally let him go. He returned to the Overworld, met my mother, married her. They had me. Then he abandoned us both.”
“Why’d he do that?”
“Didn’t want the responsibility of a family, I guess. Who knows?”
“How’d he die?”
“The White Feiry,” Ian answered. “Executed him.”
“How long ago?”
“Twelve years,” he mumbled.
“Doesn’t it bother you that he died?”
He watched the storm raging outside. “No.”
“But what about your mom? Was she upset?”
“No idea.”
“Don’t you keep in contact with her?”
He turned to her. “When my dad died, the old gods thought his punishment hadn’t been fulfilled. They demanded justice. They captured me and sent me to the Everlands to fulfill his punishment. The White Feiry found me, felt sorry for me, I guess. She raised me as her own. But I haven’t seen my birth mother in years. I don’t even know if she’s still alive.”
“Do you think you could find her?”
Thunder rolled through the air. “Maybe.”
“Was your mother a goddess?”
“Yes, Hebe is the daughter of Zeus and Hera. One of their only children. She lives with them now in the Overworld.”
“Do you miss her?”
“How could I? I barely knew her.”
“Do you think she misses you?”
Ian stared at her with a confused look. Maybe he’d never thought of it. His leather jacket creaked as he crossed his arms and turned to watch the storm again.

I’ve modified the myth a bit. Instead of being executed, Ixion later becomes bound on an eternally revolving wheel in Tartarus.

I enjoyed sharing some of my own writing with you. I do this stuff for fun, and though I tend to obsess on when and if I will get published, I have to remind myself of the reasons why I really do this. I love stories. I’m fascinated with the way the imagination works, and how closely emotions are tied to it.

If you enjoyed today’s snippet, please do me the favor of checking on my one published work, Raze, Shine # 6. Have you already read it? Today is the release date for Shine #7, Lost Haven, written by my good friend Sabrina Fish, who is also participating in A to Z over at Sabrina’s Writing Reflections. You can also see her book on Alex Cavanaugh’s post today.http://alexjcavanaugh.blogspot.com/2014/04/retro-to-z-challenge-i-iron-maiden-1982.html 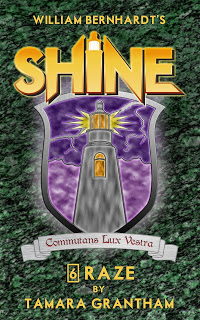