A to Z Challenge: J is for Judgment of Paris

There’s a reason why Greek myths are still around today. Sure, they’re a piece of history and important to our culture, but they’re also just fun. They’re like soap operas or, as is the case of today’s myth, a bad episode of Jerry Springer. (You remember Jerry Springer, right?)

It started with a banquet. Zeus held it to celebrate the marriage of Peleus and Thetis–the parents of Achilles. Eris, the goddess of discord, was not invited, and she was not happy about it. She arrived at the banquet with a golden apple from the Garden of the Hesperides. She threw the apple into the crowd. Written on the apple were the words, “For the Fairest One.”

Three goddesses claimed the apple. Hera, Athena, and Aphrodite. They demanded that Zeus judge who was the fairest of the three, but he refused to be involved, and chose Paris, a Trojan prince, to judge for him.

True to the drama, the judging proceeded with bribery. Hera offered to make him king of Europe and Asia. Athena offered wisdom in skill in war. But Aphrodite tempted him with something more alluring–the world’s most beautiful woman–Helen of Sparta, wife of the Greek king Menelaus.

Paris, of course, chose Aphrodite’s gift, incurring not only the wrath of Athena and Hera, but also the condemnation of the entire Greek nation. In fact, the Greeks expedition to retrieve Helen from Troy is the basis for the Trojan war.

As always, thanks for following! And if you need a fast read for this weekend, please check out my novella. Raze, Shine # 6. It’s gotten some great five star reviews. You can check it out on Amazon. Also, for this week only, Shine # 7, Lost Haven by Sabrina Fish, is only 99 cents!

Do you need to read the previous five books to get up to speed? No. The Shine books are like comic books–they’re published as monthly serials, although the first five are great reads too. I hope you discover the new Shine phenomenon! 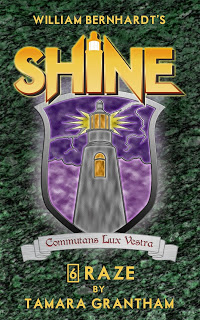 In the near future, a few young women manifest extraordinary abilities called “Shine.” Each girl’s ability is different. Some develop extraordinary mental abilities. Some become physically strong. Others have powers that defy description. But the world does not embrace these Shines. It fears them.