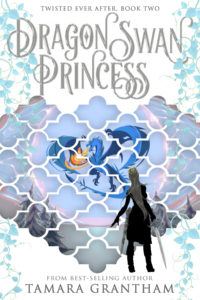 The Dragon Swan Princess is the second book in the Twisted Ever After series.

Odette Von Alarissa is a prisoner, her captivity the result of a decades-old war between the dragon shifters and the witches. But there has been a recent change in her ownership. Xaldain Von Rothbart, the traitor responsible for starting the war, is her captor now. A dragon-shifter just like Odette, Xaldain has plans for her that are unimaginable—but with a magical mark on her shoulder that prevents her escape, and the survival of her people hanging in the balance—she has no real choice but to comply.

Drekken Von Fiddlestrum has returned to his homeland to find himself in an unhappy quandary. To save his kingdom, he must marry a noble – yet he has no desire to do so. When he crosses paths with Odette, he agrees to help her. But as their feelings for each other grow, it can only lead to destruction for them both. Drekken must marry for duty, and Odette must consent to Xaldain if she wants her people to survive. True love and obligation collide in this compelling retelling of the classic Swan Princess story.