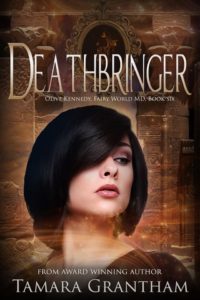 Some heroes are fated to save the world. Others are meant to destroy it…
Olive Kennedy is all about positive thinking. She’s been stuck on Earth for the past four months, waiting for the spring equinox to arrive so she can return to Fairy World—but she’s staying positive. She’s hopeful she’ll once again see her handsome Viking fiancé who’s waiting for her. She’s optimistic that her mission to reclaim the sword of Dracon—a sword of King Arthur fame and the only weapon capable of killing Theht—won’t result in death and destruction. And then there’s the small matter of an asteroid that’s been ripped out of its orbit and is hurtling toward Earth…no biggie.
One last thing—she’s fated to destroy the world. To stop that prophecy from being fulfilled, she may have to sacrifice the one person she loves the most.
Good thing she’s staying positive.