Celebrating Fall and a Bloodthorn Snippet…

Fall is one of my fave seasons and I am SO GLAD summer is over. No offense to summer, but it’s hot, my kids get bored, and now, I’m so ready for a change. What’s your favorite season?

When we moved out to Wichita over a year ago, I didn’t realize Halloween was such a big deal here. But we’ve quickly found out. The lawn decorations and class parties rival Mardi Gras in Galveston.

So, in an effort to be festive and show my Halloween spirit, I want to share a snippet from Bloodthorn that I thought was a tad creepy. We all like to be a little scared, right? 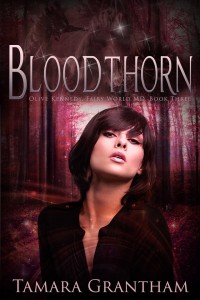 Officer Gardener waited for me. He escorted me to his patrol car, and I climbed inside. He didn’t speak as he drove me back to the festival grounds. A nervous feeling nagged at me. This whole situation seemed odd, but I didn’t know enough about law enforcement to decide if something was actually wrong or not. Maybe it was time I asked for that lawyer Brent had suggested.

We arrived back at the fairgrounds, but instead of parking in the designated area, we drove past the main gates, past the camping area, and onto a narrow gravel road that cut through the forest.

“Where are we going?” I asked.

“I’ve been instructed that you’re necessary to an ongoing investigation. Security at the festival requested your assistance. We’re going to the main security headquarters.” After a pause, he added. “Wherever it is.”

We drove in silence for several minutes. When the officer slowed the car, pulled into a farmhouse’s driveway, and then turned around, I was certain he was lost. I held my tongue, thinking that maybe being lost would work to my advantage.

He radioed in, got a confirmation of the address, and sped up. We turned onto another road, this one narrower and filled with potholes.

The road curved sharply to the left, and soon we pulled into a driveway covered in pine needles, as if it hadn’t been used for some time. At the end of the drive, the car’s headlights illuminated a cabin that overlooked a lake. Moonlight reflected off the rippling water. Officer Gardener pulled a radio off his collar and spoke quietly into it.

“Dispatch, this is Officer Gardener. I need a confirmation of correct location and address, over.”

Static filled the line for a moment, and then a female voice came through. “Ten-four, Officer Gardener. Address is 105 Greenbriar Drive.”

I focused on the cabin and found the numbers 105 tacked to the doorframe.

The officer radioed back, then shuffled through a few papers stacked on the passenger’s seat. “Surely this can’t be right,” he muttered to himself.

Something about that cabin sent shivers down my spine. Didn’t serial killers always flock to these sorts of places in movies?

A light rain began to fall, covering the car in a mist that pattered against the windows. Officer Gardener absentmindedly turned on the wipers.

After a few minutes of sitting in the rain, Officer Gardener grabbed his flashlight and stepped out of the car. “I’ll be right back,” he told me, then slammed the door shut behind him. I watched as he circled the cabin, the steady back-and-forth swishing of the windshield wipers the only sound breaking up the silence.

The darkness and rain-covered windows made it hard to see anything outside, but I focused on the flashlight’s beam as he circled the cabin and then knocked on the door.

When no one came to the door, he went inside. A hazy yellow glow appeared in the cabin’s window as he turned on a light. I watched but saw no signs of him for several minutes until he came back outside and walked to the car.

He wore a sour expression as he opened the door and grabbed my arm. After helping me out of the car, he led me toward the front porch as the rain fell in a slow drizzle.

“What are we doing here?” I asked.

“Not a clue,” he answered. “Fifteen years in the armed forces taught me not to challenge my superiors, but I can’t for the life of me figure out why Officer Sanchez requested you be sent here.”

“Is that like him to send potential suspects to some cabin in the middle of the woods?”

“To be honest, I don’t understand the man at all. You, for example, should have been detained after the first murder. Now this whole investigation is just laughable. He’s broken every procedural code in the book. In my opinion, Officer Sanchez ought to be fired.”

“Not at all. And now I’m just supposed to leave you here until the investigation starts again. But why? None of this makes any sense.”

I had to agree with him. I was just as baffled as he was, and I didn’t know how to make sense of it, except that if Brent wanted me here, then maybe this would be my way out. In truth, escaping from this tiny matchstick cabin would be much easier than burning down an entire county lockup.

Like what you read? Bloodthorn is originally $5.99 but is currently on sale for $3.99. This is the third book of the Fairy World MD series. You can find it in the Kindle store.

Haven’t read book one yet? It’s FREE! You can also find it in the Kindle store.

Book 4, Silverwitch, will be available in ebook format on December 19! I am so excited for this book. I’ve been busting my butt on edits and I think this is my favorite book of the series so far. Lots of surprises in store!