Tamara Grantham March 24, 2016 March 13, 2016Uncategorized
Hi all! Please welcome Kasi Blake to the blog today. She’s got three books out for free, so read on to find out more! 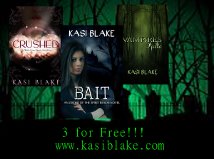 Title: Bait (Order of the Spirit Realm)
Blurb: After sixteen years on the run, Bay-Lee joins her emotionally
distant father at his New Zealand school. On her first night there, he dumps
her on the doorstep and walks away. Big surprise. Minutes later, a bag is
thrown over her head, and she’s kidnapped for Orientation. The hunter in charge
calls her Bait. According to him, that’s all she’s good for, to be used to draw
out monsters for experienced hunters to kill. Before Bay-Lee can move up to the rank of Hunter,
she will have to prove herself, battle wraiths, a reaper in disguise, and a
stampeding border monster. With the addition of her classes, she’s going to be
way too busy for a social life. Falling in love is not on the agenda.

Then, she meets Nick Gallos. With the
intimidating rank of Warrior, Nick is gorgeous, arrogant, and just plain rude
to her. It’s obvious from their first meeting that Nick is hiding a dark past
overflowing with secrets, and her father is right smack in the middle of it.
Nick seems to be using her to get even with her father, and she won’t tolerate
that. What a jerk.

So, why can’t she stop thinking about him?

Excerpt:
Connor vacated the couch long
enough to take the knife from her.  He
tossed it on the coffee table.  It landed
between his sawed-off shotgun and his .38 caliber.
“Leave the artillery at home.”
“What?”  She blinked at him, uncomprehending.  He couldn’t seriously want her to walk out of
the house unarmed.  “Are you serious?  Something could attack me.  What do I do then?”
“Depends.  If you are alone, use your extensive combat
training and put some of those tricks I taught you to good use.  You don’t need a weapon to take a monster
down.  If there are witnesses, I want you
to scream like a girl and run in the other direction.”
Author Bio: Kasi Blake is a YA Paranormal Romance/Urban
Fantasy writer with a semi-serious addiction to chocolate. Born in sunny
California, she now lives on a farm in the Midwest with a dog, two cats, ducks,
chickens and cows. When she has the time, she haunts local bookstores, hangs
out with friends, and tries to catch up on her reading list. The rest of the
time she’s working on her next novel.
Amazon Page: http://www.amazon.com/Kasi-Blake/e/B004ZH6MJM
iTunes: https://geo.itunes.apple.com/us/book/bait/id642022597
Smashwords:  https://www.smashwords.com/books/view/252449
Website: http://www.kasiblake.com