Last night I watched a movie on Netflix called Europa Report. As my husband can attest, I’ve been picky about movies since I started writing. I see flaws that I never saw before. I pick apart the character motivations and plot flaws.

I thought Europa Report would be another cheesy sci-fi. It screamed low budget sci-fi on the cover. No name actors, unheard of director. I was in for a gimmicky monster movie where the plot was thin. Maybe the special effects would be decent. It’s what I hoped for.

Europa Report shocked me.The plot was well researched. If the acting was bad I couldn’t tell because the story was so engaging. I’ve been researching for a sci-fi novel and learned that Europa is an ice-covered moon of Jupiter. It’s thought to have liquid water beneath the surface. It’s also bombarded by radiation from Jupiter. It seemed like a good place for a movie, and I was right. The writers of the film did an excellent job. It wasn’t what I expected. 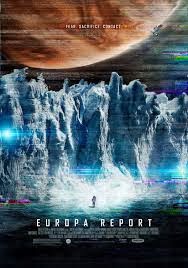