Hi Friends! I’ve been hard at work on Deathbringer, the next book after Silverwitch in the Fairy World MD series, which means I haven’t posted much about Silverwitch. Today, I’m fixing that and giving you a snippet. Hope you enjoy!

To pre-order your copy of Silverwitch, releasing on December 19… 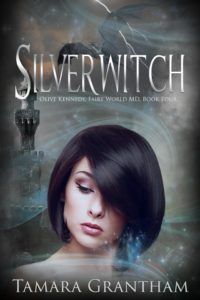 Up ahead, under the silver moonlight, mist fogged the air where the river turned to a thundering waterfall. In the mist, I found a man standing on a rock wall. He faced away from me with his hands clasped behind his back as he stared over the edge.

Although he wore the same refined clothing as the rest of the gathering—a dark green tunic with jeweled collar and cuffs, dark pants, and tall boots—I knew him immediately.

“Kull,” I called, rushing toward him.

He rounded, his eyes wide with surprise as I neared the distance between us. As I approached, I almost didn’t recognize him. His eyes weren’t his. I stopped and drew back. He looked at me as if he didn’t know me.

He blinked as if coming out of a trance, and the look disappeared. “Olive?”

Stepping off the ledge, he approached me, walking guardedly, and then stopped. We only stood a few feet apart, but to me, it felt like miles.

He forced a smile.

My insides squirmed. This was him, wasn’t it? It felt as if the shadow, that constant companion that had haunted him since his father’s death, that had only recently been lifted, was returning once again.

I went to him and hugged him gently, resting my head on his chest. His heart beat in steady, slow thumps. It was still him, and I refused to lose him again.

He took my shoulders and moved me away from him, then pulled down his tunic collar to reveal a band of stone around his neck.

“She’s trying to make me one of hers.”

A clammy sweat broke out over my skin. “We’ll stop her. I won’t let that happen to you. We can escape.”

He turned to stare at the waterfall. “There is a way,” he whispered, and then pointed. “Down there.”

I studied the water as it barreled over the edge. There was no way to tell what lay at the bottom, but the drop didn’t look survivable. “Is that the only way?”

He stepped closer to me, took my arm, and leaned toward my ear. The roaring water almost drowned out his voice.

“Listen carefully. You must meet me here after the ball. There is a hidden staircase that runs the length of the falls. We’ll escape together before she changes me.”

“She said she’ll kill you if I try to escape.”

“Then we must go together. We’ll return to the ball for a time, and we must pretend to not know about the staircase. The queen is smart, but she’s overconfident. No one has escaped from this place, and so she thinks it’s not possible. But that’s only because she’s taken these people’s free will, so they have no reason to escape. She’s grown lax. That’s how I was able to find the staircase so easily.”

Glancing past him, I tried to see the hidden staircase but could only see the mist reflected in the moonlight. What if the collar were messing with Kull’s mind and making him see things that weren’t there?

“You’re sure there’s a staircase down there?” I asked.

“Yes, I discovered it earlier when she was away.”

“Are you sure we can use it to escape? What if it just leads to another part of the castle?”

“I don’t know, but I’m willing to try whatever it takes to escape this place.” Desperation shone in his eyes.

I wasn’t sure if I should follow him or not. It didn’t seem as if he were using sound judgment, but I couldn’t blame him—he was about to become the queen’s prisoner for the rest of eternity. Squeezing his hand, I knew I would follow him through hell and back if it meant we were together.

Kull kissed my forehead, and I took in the familiar scent of his skin and hair, the wild essence of dark forests and sandalwood. We would survive this somehow. We always did.

Need to know what happens next? Pre-order your copy today!