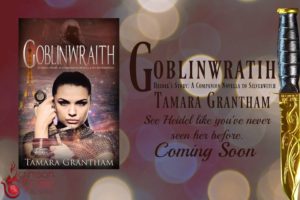 CLICK THE IMAGE to pre-order your copy of Goblinwraith, available December 23rd!

But I am super excited about the release of Goblinwraith. It’s unique because it’s the only book of the Fairy World MD series not to feature Olive as the lead role. I must say, Heidel did a great job at taking the lead. I’m even considering writing another story later on with her as the lead.

Goblinwraith takes place during Silverwitch. I wrote a scene where Heidel takes off on her own, and including it in the book wasn’t possible, so it became it’s own story.

For today’s post, I wanted to share a special snippet. Heidel and the thief, Maveryck, have been transported to Earth. They’re trying to reclaim a lost magical staff that’s been stolen by a transformed wraith, and they’re discussing what to do as they eat dinner. There is some chemistry between the characters, and I have to admit, finding someone for Heidel to fall for was no easy task.

From GOBLINWRAITH, HEIDEL’S STORY: A COMPANION NOVELLA TO SILVERWITCH:

I had almost convinced myself I was okay with the dress, and then I slipped on the shoes. As I stood, I felt my knees wobble, and it took a great deal of balance and coordination to make it out of the room and down to the hotel’s bottom floor to the restaurant.

Exhaling nervously, I stood outside the restaurant’s doorway. When a man questioned my seating arrangements, I realized I could no longer go through with sharing a meal with Maveryck. A tight knot formed in my stomach, making me queasy.

The man questioned me again. I could only mumble a reply before I turned to leave, but as I did, Maveryck appeared at the doorway.

“Heidel?” The way he said my name made me stop and slowly turn toward him. He had changed his clothing again, and now wore a suit with a dark coat that accentuated his broad shoulders. He’d pulled his hair back, bringing attention to his high elven cheekbones.

My goodness, can the man be any more gorgeous?

I straightened. Although I no longer wore my armor, I was not weak, so I stood tall.

“Well, are you going to escort me inside or not?”

He offered his hand, and the knot in my stomach tightened. What was I doing? I couldn’t share my dinner with him. I wanted no part in whatever my feelings were doing to me. I couldn’t afford to fall in love, and being dangerously attracted was the first step.

And yet as I reached for him, I couldn’t seem to stop.

“You look beautiful,” he said, and then he slowly kissed my knuckles, his lips soft and warm. A shiver ran through my body. What would his lips feel like pressed against mine?

He spoke with such grace—an old-world charm that was long forgotten. His voice’s seductive edge drew me to him. I couldn’t look away as he straightened and led me inside the softly lit restaurant. The serene ambiance seemed to come from everywhere—from the bouquets of white roses, to the quartet of musicians playing stringed instruments.

Maveryck led me to a small, cloth-covered table and politely pulled out a chair for me. In Faythander, I would have likely pulled my sword on any man offering me a seat, but since I was in Earth Kingdom, and since none of my kinsfolk was here to see me, I didn’t argue. I hardly felt like myself. In fact, I felt at peace, yet at the same time, vulnerable. Conflicting emotions warred within me, and I wasn’t sure which would win.

Maveryck took his seat across from me. Everything on the table seemed to gleam, from the porcelain plates, the knives and forks, and the crystal glasses.

“How do you like it here?” Maveryck asked me.

I shrugged. “It’s a bit too lavish for my taste.”

“Everything is too fragile. I feel as if I might break something.”

“Maybe not for you.” I eyed him. He seemed overly comfortable in this world. It was time he gave me answers. “How do you fit in so easily? For that matter—who are you? You’ve the features and clothing of an elf but the ears of a human. Where do you come from?”

“I suppose I am somewhat of an enigma, aren’t I?”

A server arrived with a basket of bread and bottle of wine. He spoke to Maveryck in a strange language, and Maveryck responded. I had no choice but to sit and listen, hoping that whatever Maveryck had chosen for me to eat would be edible. I doubted boarhound was on the menu.

After the server left, Maveryck turned his attention back to me. “So, you want to know who I am, do you?”

“Yes. I believe our quest would go more smoothly if I knew who I was working with.”

“Very well.” He sat back. “I was born to Wult parents, though I had an elven grandmother. My parents were killed, and I was adopted by a noble elven family, but their ways didn’t suit me, so I set off on my own. I’ve been alone since then. Well, except for Grace.”

“I’m not sure the wolf counts as a companion.”

“Fair enough.” I ate a small bite of bread. “Why did you leave the elves?”

He shrugged. “Differences of opinion, mostly.”

“Have you ever wanted to go back?”

He gave me a bemused smile, as if he knew something I didn’t. “I suppose I’ve thought of it from time to time, but I’ve always felt more comfortable on my own. Someone with a reputation like mine can’t afford too many attachments.”

“Because you’re a thief?”

It was my turn to smile. “Hardly.”

The server came back, this time with two dishes of food. He placed one plate in front of me and the other in front of Maveryck, gave us a polite smile, and then walked away. I stared at my food and then picked up the fork and poked the tentacles doused in white sauce.

“Calmar au citron. Squid with lemon in a white wine sauce. It’s quite good. You should try it.”

Being trained in survival, I’d learned never to turn down a meal, but this was pushing it. I took a small bite of the rubbery appendage, and though I was prepared to spit it out, it tasted flavorful.

“It’s not bad. At least it’s better than my sister’s cooking.”

“Don’t push it.” I took a larger bite followed by a sip of water. “Tell me, have you been able to work out a way to retrieve the staff and get us off this planet?”

“I’m still working on the details, but I think I’ve come up with something.”

“This is what I know so far. When we fought the wraith in Faythander, the staff interacted with the reflection in the ice and created a portal. I’m not sure how this happened exactly, as magic does not usually work without a practitioner, but the staff most likely has properties we don’t understand. Whatever the case, we are now in Earth Kingdom with no way back.”

I sighed. “Then how are we to get home?”

“I know of only one way. We must find an existing portal here in Earth Kingdom, and the closest portal I know of exists on a small island just south of the coast of Montpellier, France.”

“I, eh…” He cleared his throat. “I’ve researched the subject of portals a few times—in the past.”

“Where did you come by this knowledge?”

“It is if you want me to follow you.”

He rubbed his forehead. “Why do you need to know?”

“Because I need to be able to trust you.”

“I assure you, I speak the truth when I say there is a portal on the island I speak of. Where I get my information is not important. You can trust me.”

I avoided meeting his gaze. The truth was I wasn’t sure I could trust anyone ever again. I’d seen too much and heard too many lies. Someone like Maveryck would never understand.

I shrugged. “Maybe both.”

Curious to know what happens next, be sure to order your copy of Goblinwraith today!

to grab your copy!