Hi Friends! Today I get to blog about a topic I rarely get the chance to discuss–I am reviewing a movie I saw in an actual theater with my husband and without children.

I know. The Apocalypse is nigh.

I would first like to start my review by not reviewing the actual movie, but the theater. In the past 10 years,

I’ve lived in four different cities, and the movie theaters have varied from scary to fairly nice. However, the Warren theaters put every single one of them to shame. Now, I’m not saying that these theaters are the most luxurious places you’ll ever visit in your life–but, they are super unique and downright fun. I loved the reclining seats, the meal served while watching the show, and I would be ungrateful if I didn’t mention the chocolate mints in the bathroom. As soon as you walk in the lobby you get the sense that you’re in an old-style, Hollywood theater. The word elegant comes to mind. As for pricing, yes, you’ll certainly find cheaper theaters, but you get what you pay for, and in this case, movie night was ten times more fun spent here than at the budget place. And since my husband and I average a few dates a year, I think our bank account will survive. 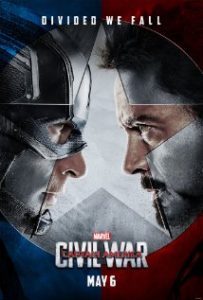 Now on the review of the actual movie, Captain America Civil War. Likes: The Black Panther. He was introduced in a fun way and I’m really excited to know more about his character, and I hear that they are making a movie focusing on his story, which I will attend at the Warren theater. 😉

I also liked watching the dynamics between the heroes and friends, Captain America finding a love interest, and the continuation of Wanda Maximoff’s (Scarlet Witch’s) character. I loved the introduction of Spider Man and how he was made to be a real, normal teenager, and not a 25 year old pretending to be in high school. Ant Man is quickly becoming one of my favorite heroes, and I enjoyed his dialogue throughout the movie.

Dislikes: A lot. Sorry. It started with fighting, continued with fighting, and ending with…yep, fighting. Way too much fighting. So much fighting that my mind wandered and I lost interest in the story. Why does Hollywood think we want to see that much violence? In the writing classes I’ve attended, I was taught that a little action goes a long way, and can be a great source of tension, but only if used sparingly and at appropriate moments. Too much action will lead to losing your readers. In movies, it seems no different. For me personally, I always feel that the fighting is pretty pointless. I know the main hero or heroine isn’t going to get killed off halfway through the movie, so let’s move on with the story.

I was also confused by Captain America’s character. Earlier in the movie, he tells his buddy to be careful because “they don’t want to kill anyone.” And [SPOILER ALERT] by the end of the movie, he intentionally tried to decapitate Iron Man. This doesn’t make any sense to me whatsoever. On the one hand, Captain America is trying to avoid killing people he’s never met nor has any vested interest in their lives, and then he’s prepared to kill a good friend. The story between these two points doesn’t give a good explanation of his change. Captain America has never been portrayed as a cold-blooded killer, and it bothered me that this scene was included. I get that the fighting was part of the story–but killing and fighting are two different things with two very different end results.