My News: Exciting, Nervous, EXCITING! Read to Find Out!

Okay, first, I’m NOT pregnant. I know you might have thought that from the title of this post. Nope. That’s not the news. BUT it is something really exciting.

If you want to know what it is, you’ll have to keep reading, because there’s a story behind this news…

Last summer, I found out that Dreamthief got nominated for a RONE award, which is a prestigious award for indie and small-press authors. It’s kind of like the Oscars for books. Anyway, I was so over-the-moon excited. Later, I learned that Dreamthief made it through the voting phase and became a FINALIST. I was seriously walking on clouds at the news. Writers have a tendency to think negatively of their work and think they aren’t good enough, and to finally be recognized was an amazing feeling.

The coordinators of the RONE awards contacted me to see if I wanted to attend the conference, where a winner would be chosen, in California. I wanted to go. My husband encouraged me to go. I should have gone. But I didn’t. I had plenty of excuses: I wasn’t sure I would win, it cost money, I would have to find a babysitter, etc…

Months passed. On the day of the awards ceremony, as I was sitting in church teaching my Sunbeams (4 year olds) I was shamefully looking at my phone when a friend messaged me congratulating me on my RONE award.

Okay, I was so excited. But seriously, I SHOULD HAVE BEEN THERE!

Months later, the award was mailed to me. I was so happy to get it, I dragged my husband away from his video game to go on a photo shoot where I made him take pics of me with the award. He bore it dutifully, but alas, a photographer he is not, and after a long time of getting blurry, cropped pictures, I started to lose my patience. 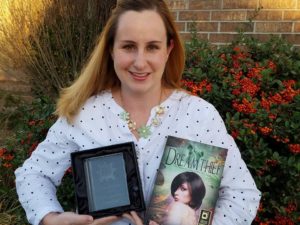 This is the one “good” pic that came from the photo shoot. Note my head was cut off a little. Sigh.

The inevitable happened. I stupidly dropped the award–a beautiful glass block in the shape of a book–and it shattered.

At that moment, as I stared at the pile of ruin, my writer’s brain turned melancholy, and I couldn’t help but think…was this a symbol of my writing? Would all the work I put into this be shattered? Was this all I got at the end of this journey? A pile of broken glass?

I picked up the pieces, stuffed them back into the beautiful velvet box, closed the lid, and hid it on a shelf.

I haven’t looked at the award since then. I couldn’t bring myself to tell anyone what had happened–what I’d done. I couldn’t blame it on anyone but myself. But I did regret not going to California to receive the award. Maybe it wouldn’t have broken. Maybe I could have gotten some decent pictures. Maybe I wouldn’t have felt like such a failure.

Again, months passed. I kept writing. I wrote four books after Dreamthief, and I even submitted one of them for a review at InD’tale, the website that hosts the RONE awards.

Last night, I received an email stating that my book Bloodthorn has become a RONE award nominee. 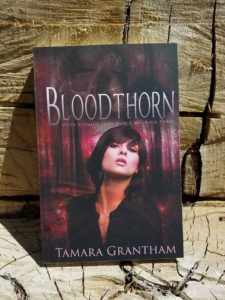 I just about dropped my phone.

Oh, I know, there’s a huge possibility I won’t win another award. It would be miraculous to happen twice in a row. BUT I HAVE ANOTHER CHANCE!

Even if nothing comes of this, after getting the email, I went to that pretty black box that I’d stuffed on the shelf, dusted it off, and opened it. You know what? That award wasn’t as damaged as I remembered. Yeah, it can’t be displayed, but it wasn’t completely ruined. It wasn’t shattered. And maybe someday, maybe this fall, maybe in a year, maybe in several years, I’ll have another to replace it with.

But if that never happens, even if I never get another award again, that’s not why I do this. I write to tell fun stories, to inspire, and to give hope. That’s why I do it. That’s why I’ll never stop.

***Would like to help me win the RONE award? YOU CAN! The voting phase for the New Adult category opens April 24th and ends April 30th. To vote, you need to register on InD’tale’s website. Click HERE to go to their website and register for an account, and be sure to vote when it’s time!