My Road to Finding a Publisher

Greetings readers! Today I felt like it was time for me to tell “my story.” I’m always curious to know how other authors got started, and while I don’t have time to tell my whole story, I at least wanted to discuss what made me choose an independent publisher over a traditional publishing house.

I’ll start at the point where I had four manuscripts written. I was four years into my writing career, and had already been querying agents for three years. I’d attended workshops, seminars, had attended rigorous critique groups, had three of my books professionally edited. I’d even been picked to shepherd two well-known agents at a writing conference, including going to dinner with them and driving them to various places during the writing conference. I’d gotten to actually know them as people, and they’d gotten to know me as someone other than a name on a computer screen. Both agents asked to see my work, but after waiting more than a year to hear back, I was rejected.

The next conference I planned to attend was the LDStorymakers conference in Layton, Utah. There were several agents I’d picked who I thought could rep my work. After talking with a friend–who had met one of the agents, Josh Adams, at a previous conference–I chose to pitch my book to him. My friend told me that he was very down-to-earth and friendly, and that he was looking for books similar to mine.

During this same time, I’d been thrilled to publish a few novellas along with my writing mentor, William Bernhardt. The concept was serialized novellas released monthly–the story about girls with extraordinary abilities. He called it the Shine series, and it gave me my first taste of publication. However, I was still set on publishing my own novels and finding an agent, thus landing a deal with one of the top New York publishers.

To steal from Star Wars, Josh Adams was my last hope.

Once I got to the conference, after practicing my pitch until I could say it in my sleep–after giving the very same pitch to five other agents–and all five asking to see pages, I felt confident. I’d been through the ringer. Writing 1,000+ words every day; attending three, week-long intensive seminars; four novels under my belt, yes, I felt ready.

The time came to give the big pitch. I was ushered into a large room, with a desk in the center, no windows–to be honest–a little like an interrogation room. Josh was running late, so I was instructed to sit and wait. I remember sitting there, after leaving my then four babies back in Oklahoma, flying halfway across the country, spending money I didn’t have, just to be there–I prayed it was worth my time. I knew the chances of actually getting picked up by an agent were extremely slim, but I also knew that if I quit trying, that would be the moment I never got published.

Also, I had a weird way of battling those pesky nerves, but more about that later.

He hurriedly asked me what my book was about–and after giving the first line of my pitch–he stopped me. I politely answered his question, then continued. After the end of the pitch, he asked me a few more questions. He said I could send pages to his secretary if I wanted, glanced at the clock, and asked me to leave.

I left. I went to the lobby and sat. It was raining outside, and I had an odd sinking feeling in my stomach. But, why? Wasn’t this what I wanted? He’d asked for pages. Shouldn’t I have been happy?

The truth was–I didn’t want him to see my book.

To answer the question I posed earlier–how do I combat my nerves? Here’s the answer: When entering the room to pitch to the agent, I imagine my book characters coming with me. They’re rooting for me, because once I find that publisher, then they get their chance to be born. Imagination is a funny thing. We all know that Luke Skywalker, Harry Potter, Katniss Everdeen, and Sherlock Holmes aren’t real, but it doesn’t matter. They make us feel emotion–the same emotions we feel when confronted with real-life situations–and that was the same wish I wanted for my own characters.

They were there with me when I gave my pitch, and they were there with me when I sat in the lobby afterwards. I wasn’t ready to let them go. With Josh’s hasty remarks and general disinterest, I knew he would never in a million years pick up my book. Even worse, I realized that even if he did accept to take me on as his client, would I want him as my agent? No. And so I made the decision not to send the pages.

The story could have ended there.

An up-and-coming independent publisher was also attending the conference, and I’d read several of the books they’d published. I fell in love with those books, and I was excited to get to meet the people behind the publisher. The publishers meet-and-greet was that night, so I shook off my encounter with Mr. Adams, and went to meet the ladies of Clean Teen/Crimson Tree Publishing instead.

When I entered the room, I immediately spotted their table. Amidst the boring beige and white booths presented by the other publishers, I found a black banner with colorful images of eye-catching, professional book covers at the back of the room. Bookmarks, badges, and stickers filled their table. When I met Marya and Courtney, I was taken aback by their friendly smiles. The highlight came when I got to meet Clean Teen’s authors–Holly Kelly, Amanda Strong, Melissa Cunningham, and Erica Kiefer. I felt like the giddy fan at the rock concert. The story didn’t end there. While I had already submitted my book to Clean Teen, weeks later I found out that I’d gotten yet another rejection. It hurt, of course, and so I debated going back and playing Agent Roulette–but that’s when I had an epiphany.

Did it matter if I got a big publisher? The only thing that should matter is that my books make into the hands of readers, right?

So, I started again. I finished that unfinished elusive book number five–the story of a Fairy World psychologist who helps people with abnormal behaviors because they’ve been to the land of fairy. I submitted to ten agents and didn’t hear back from a single one–not even a “no.” But that’s standard for the industry now days. Then, I submitted to two smaller presses–one being Clean Teen. A day later, I had requests for manuscripts, a week later, I had offers from both–and a day after that–I signed a contract.

Since then, I’ve published two books in the Fairy World MD series, and four novellas in the Shine series. My own publishing story isn’t finished, because for every opportunity comes a new set of challenges. However, the reward that matters to me most is to hear from readers–that they loved my book, that it helped them forget their problems for a little while, that they sympathized with my characters, that it helped them feel happier or more fulfilled. For me, that’s the elusive pot of gold at the end of the rainbow. And I didn’t need an agent to find it. 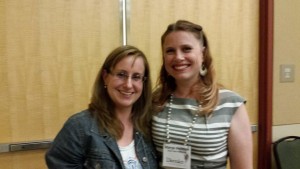 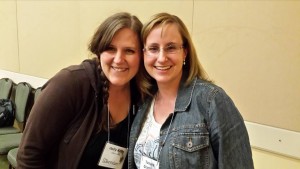 Me (right) and Author Holly Kelly. 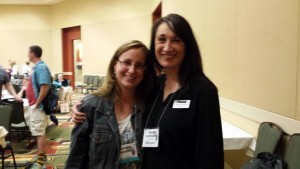 Me (left) and Author Melissa Cunningham. 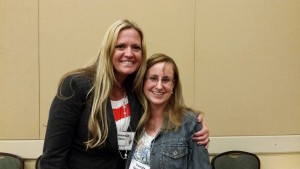 Me (right) and Author Amanda Strong. 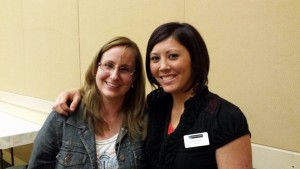 Me (left) and Author Erica Kiefer 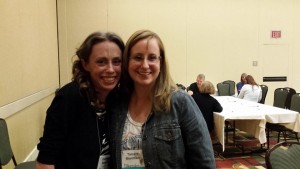 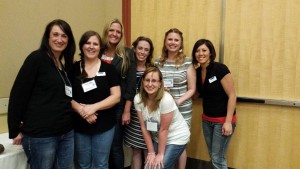 The whole group! After going through these pics, it occurs to me that I may seem exceedingly short. I’m 5′ 4″. The rest of you are just giants.