I’m so excited to be the first to tell you about the release of my newest Shine novella, Never Say Reven. Do you need to read the previous installments? No. But you’ll miss out on some great writing if you don’t! Shine 10 is the first of a three book story arc. The next books will be released in the coming months.
Here’s what it’s all about…
June Brighton has the ability to hear a person’s heartbeats. On the night of her senior prom, she uses her talent to track down a Reven–a Shine bounty hunter–named Memphis Stone. He’s ruthless, cunning, and smarter than any Reven she’s ever encountered. And as it turns out–he’s also the only Reven who has ever been able to capture her. Almost before she knows what happened, she’s on a boat headed to a Shine “facility.” But she’s astonished to learn that Memphis isn’t after money. His motivations are darker–and much more dangerous. Will an alliance with him save her? Or will she spend the rest of her life as a prisoner–or worse? 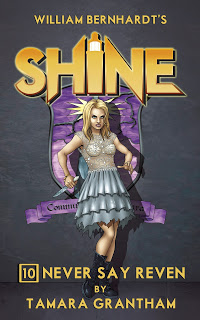