Show Vs. Tell and Why are Discussing This Again? 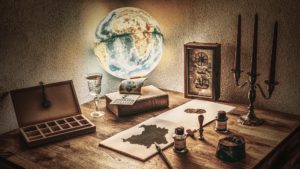 The first rule most writers learn is this: Show don’t Tell. What does that mean? Easy. If you want your readers to be bored and have no sense of your world, you tell them about it. (The grass was brown. She was gorgeous. The car was old.) How is this telling, you ask? There are these little words called “to-be” verbs, that authors are cautioned to use sparingly. (The word “was” in the previous sentences.) They usually denote telling and if overused, can lead to stale sentences that do very little to paint a picture in your reader’s head. If I were to rewrite the previous sentences, I might say something like this “Brittle, brown grass crunched beneath my feet. The woman’s flaxen hair fell in soft waves around her porcelain face. Rusted metal rattled, and the stench of old grease filled the air, as the car rumbled down the street.”

Show-Don’t-Tell is a pretty basic rule, one that’s easy to fix. In fact, I had a writing teacher who would go through our manuscripts and circle all the to-be verbs in red ink. Then we would go through and have to rewrite the sentences. Sometimes they were easy fixes, other times it involved completely rewording your thoughts. Needless to say, the practice of “showing not telling” was drilled into me. It was a lesson I didn’t forget.

So why am I bringing it up now?

Because this is a subject that’s been bugging me for three years, since I released my first full-length novel, Dreamthief. Not long after it’s release, I got a really nasty one-star review, ripping me a new one for telling. In fact, the author of the review put her comments in all caps. “SHOW NOT TELL please.”

How was that even possible? I understood show-don’t-tell. I’d rewritten all those sentences. The red ink! How could this reviewer possibly believe I was telling?

Then I read a similar review for Jim Butcher’s Storm Front. Jim Butcher is one of my top three all-time favorite authors. I love his creativity, and most of all, his writing style. When I read his books, I feel like I’m on the adventure with Harry Dresden, and I’ve always been able to clearly picture the scenes. In my mind, Butcher is a master of showing-not-telling. How could both my book and his be ripped for writing telling sentences?

There is a reason, and it has to do with viewpoint.

Both Jim Butcher and I (and yes, I’m having fun comparing myself to the great one) write from a very close, first person point of view. It’s such a close first person that our characters often tell their thoughts, thus showing the world from their perspective. For example, the first line of Dreamthief, “I don’t believe in karma.” A similar line in Storm Front. “My name is Harry Blackstone Copperfield Dresden. Conjure by it at your own risk.”

Each example tells us something about our hero or heroine. We’re told from Olive’s point of view what her perception is on a certain belief. Harry tells us his name, and that it’s prudent to use caution if you want to use it for spells. One might argue that these examples are obviously telling. Olive is telling us what she believes. Harry is telling us his name. But are these really examples of show-don’t-tell?

Telling is the author’s intrusion. It’s lazy writing. It’s using those “to be” verbs to describe your world from the author’s perspective. In the previous examples, our characters, who have strong voices meant to color the novel, explain something from their viewpoint. These are from the CHARACTER’S VOICE, not the AUTHOR’S.

I would also argue that there is plenty of showing going on in Storm Front and in Dreamthief. For example, when Olive enters Faythander for the first time in 12 years…

Trees as tall as cathedral spires spanned toward a sapphire sky. Their leaves remained a deep autumn red, even through the winter. A carpet of grass, softer than anything on earth, cushioned me. Towering mushrooms circled the forest. The house-sized fungi grew in shades of fluorescent green, dark amethyst, and orange with brown spots.

I challenge you to find one “to-be” verb in that description. There isn’t. There are, however, “to-be” verbs when Olive’s voice comes through, which sure, it’s telling, but not by the author. When telling is utilized, it’s done in such a way as to SHOW the inner thoughts of the lead character.

So that’s my soapbox rant on show-don’t-tell.

If you didn’t know, my entire Fairy World MD series is now on Kindle Unlimited, which means that if you’re a subscriber, you can download the whole thing for zero pennies. ZERO PENNIES! ALL SEVEN BOOKS!

You can find the whole series on Amazon.