#Writing and Research for BOOK SIX!

I’ve been hitting the edits for book six hard this week, and I thought I’d share what I’ve been up to. Swords play a big role in this book, and this particular sword needed to be something special. In draft one, I came up with a stereotypical sword and used it as a placeholder, although I knew I’d need to change its description eventually. I did a little research online and found this pic from trueswords.com*: 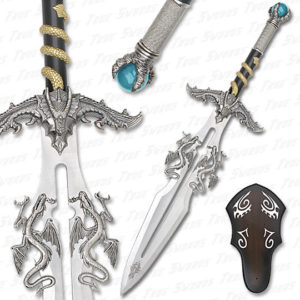 It inspired me. Although the sword I needed to describe wouldn’t be as elaborate as the sword pictured, it still gave me something to work with. In the end, I came up with this description:

I wasn’t sure what to expect as the sword formed before me—perhaps a smooth, mirror-like blade, something with jewels decorating the grip and cross-guard, maybe something overly embellished and ornate. Instead, an unassuming weapon took shape.

A strip of leather, weathered and blackened with age, wrapped the grip. The once silver blade was tarnished, though was straight and true. The cross-guard was a simple piece of craftsmanship, a single silver piece with squared ends. The only ornamentation found on the weapon was at the bottom of the grip, where a silver dragon claw clutched a sapphire crystal that glowed with magic. Symbols appeared along the center of the blade, blazing as if they were written in fire.

It was an ancient weapon, full of power, and I only had one thought.

Kull would love this sword. I’d never get it away from him.